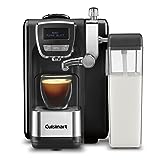 Also available from Target and Walmart

One of the best features about the Cuisinart EM-25 is that it’s Nespresso OriginalLine compatible. This opens up your options when it comes to using capsules. You can get your capsules from Nespresso or from Nespresso-compatible brands, including everyone’s favorite: Starbucks.

There’s also the option to use refillable pods, as those are available to Nespresso’s OriginalLine machines. However, it is important to choose a capsule that’s of good quality, as some are poorly made and can break your machine – leaving it out of warranty. Also, some won’t even fit. At this point, it’s safe to say that I am definitely not a fan reusable pods, so use them at your own risk. 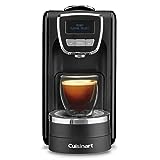 The EM-15 model has the same features as the EM-25 except for one thing: the built-in milk frother.

If you simply enjoy espresso or Americanos (Espresso + hot water), this machine would be more than enough. Or if you already have some sort of milk frothing solution, like an electric milk frother, and do not need a machine with built-in frother, then the EM-15 would be a great choice.

Also, you can do the math and work out if it’s going to be cheaper for you to buy a separate electric milk frother, which are available from many different brands, or go for the built-in option.

Cuisinart vs. Nespresso – Which Is Best To Buy?

Since the Cuisinart EM-25 is a Nespresso OriginalLine compatible machine, it means it is a direct competitor to Nespresso’s OriginalLine machines. And you must be wondering, should you go for Nespresso or Cuisinart?

If we want something more comparable to the Cuisinart EM-25, we need to look at machines with built-in milk frothers like the Lattissima line: Lattissima Pro, Lattissima Touch, or Lattissima One/Gran Lattissima.

Let’s start with programmability: all of these machines can basically make the same coffee drinks from espresso or milk based drinks. Also, all of these have the ability to reprogram coffee or milk volumes to customize your drinks to your liking. However, only Cuisinart’s EM-25 offers the option for brew temperature control. Also, only one Nespresso Lattissima model has an LCD display, which is the Lattissima Pro. This isn’t exactly a big deal breaker because reprogrammability is quite easy that you don’t need a display.

Design wise, Nespresso machines do have a more modern and upscale design. Although Cuisinart’s EM-25 isn’t have bad, either. It is somewhat compact and has some chrome accents to add a nice touch to the overall design.

Capsule compatibility is the same for both brands, you can basically use any capsule that’s labeled as Nespresso OriginalLine compatible. Those are available from Nespresso, Starbucks (also produced by Nespresso), or from famous coffee brands like Lavazza, illy, Peete’s and many more. I would highly suggest that you go for brands that make Aluminum capsules, from personal experience, aluminum capsules produce best quality espresso at better temperature.

What if you decide to go for the Cuisinart EM-15, which compares to Nespresso’s Essenza, Pixie or CitiZ… which do you go for?

I would say, if you’re judging by functionality only, they’re all the same. They will produce a single or double espresso all the same. All have the ability to reprogram the volume, too.

If you’re looking for design and quality built, too. then I’d say it depends. A machine like the Essenza Mini, for example, has plastic housing like the EM-15. But the Essenza Mini is very slim, at 3.3” width only, while the EM-15 has 5.4” width. The CitiZ is about the same width as the EM-15 and both have the same chrome accents, so they’re the most comparable design-wise. The Pixie, however, has the most upscale design with its metal side panels, metal bar and backlit used capsule bin (that also works as an indicator for empty water tank.

Overall, I would also recommend that you compare the prices of each of these models at the time of purchase. Going for whichever machines has the best price at the time would be a good idea, since you would be getting the same espresso drinks from either machine. Nicole
Enjoying coffee, one pod at a time. Bringing all my coffee expertise to this blog.