Why Buy a Coffee Maker with Hot Water Dispenser?

One of the great benefits of having a coffee maker with a built-in hot water dispenser is having hot water available on demand. No need to wait for the kettle to boil.

You can use the hot water to make anything else, tea or instant meals. Water heats up and remains hot inside the machine until you need to use it.

What To Consider When Buying a Coffee Maker with Hot Water Dispenser?

This 12-cup coffee maker by Cuisinart works like any traditional drip coffee maker. You get your glass carafe with hot warming plate, digital clock and auto on/off programmability. The hot water dispenser is set on the right of the machine and it operates individually with its own water reservoir and its own on/off switch. The hot water reservoir has a 54 oz capacity, so it’s enough for multiple uses. Light indicators will show you when the hot water is ready or when the reservoir is empty. 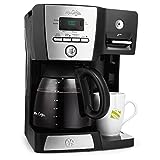 Mr Coffee’s coffee maker also has two separate sides, one for coffee brewing and another for hot water.

Using the K-Elite, you can brew 4, 6, 8, 10 or 12 oz serving sizes. That’s every size Keurig has to offer, all in the same machine. Brewing options include: Strong brew, which steeps the coffee for a longer time to get you that bolder flavor, then there’s the Iced setting, when also brews a stronger and shorter brew, so it doesn’t taste watered down when the ice starts to melt.

The Hot Water button is what you use if you just want hot water. First you select your serving size then press the button for hot water to dispense. The only downside, in my opinion, is that the machine doesn’t have a separate spout for the hot water. This may result in some coffee ground residue coming out with the hot water. To avoid this, you can dispense a smaller amount first to clean out the spout and get rid of the residue, then dispense again.

Keurig K-Elite is compatible with all Keurig K-Cup pods, including refillable ones.

The SS-10 is the best K-Cup brewer from a brand other than Keurig. Made by Cuisinart, who are leaders in kitchen appliances, you can expect a lot of features in this brewer.

To start, the SS-10 has several serving sizes, from 4 oz up to 12 oz. You might think, it is exactly like the K-Elite featured above, and you’re right. The difference is, the SS-10 was introduced years before the K-Elite, so Cuisinart was actually able to offer brew size variety way before Keurig did.

The SS-10 has a generous 72 oz removable water reservoir with a charcoal water filter. It is compatible with all K-Cup pods.

Let us know if you liked the post. That’s the only way we can improve. If you need an answer to your feedback, kindly include an email address so we can contact you.

The owner of this website, , is a participant in the Amazon Services LLC Associates Program, an affiliate advertising program designed to provide a means for sites to earn advertising fees by advertising and linking FavoriteCoffeeBrew.com to Amazon properties including, but not limited to, amazon.com, endless.com, myhabit.com, smallparts.com, or amazonwireless.com.